DVD re-release alterations: Is it ever okay? 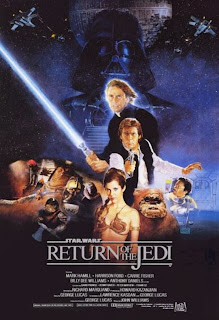 A few weeks ago I watched the original Star Wars Trilogy (1977-83) for the first time in my life. I'd caught glimpses of it when I was a child but I'd never watched it from start to finish before. I absolutely loved it! The characters, the locations, space, the music, and the story! Call it straightforward but it works. It is a great story and each episode was hugely entertaining. After watching the films I read that George Lucas had revisited the films and altered them in different ways for DVD re-releases. For someone like me, who never saw the original theatrical releases, I will forever be none-the-wiser about those changes - except for one glaringly obvious one.

At the end of Episode VI - Return of the Jedi (1983), Luke, Han, Leia, and all the gang are celebrating their victory over the dark side. Whilst everyone is celebrating, Luke turns away and has a little private moment of reflection to himself. He then sees before him the ghosts of Obi-Wan Kenobi, Yoda, and... low and behold... his father. But the ghost isn't Darth Vader in his black helmet and cape, rather it is his father as Anakin Skywalker before he fell to the dark side. This isn't what shocked me though. Even though I was surprised to Luke's father standing side by side with his old friends, redeemed, I was very surprised to see that it was the Anakin of the later Star Wars films, played by Hayden Christensen. I knew instantly that there had been an alteration, because Christensen was probably a baby when the original Star Wars films were made. After the first shock, my eyes teared-up - it was a moving moment to see Anakin redeemed of his past and finally becoming the jedi he was born to be. Also the fact that his son Luke was now able to look on his father in his human/good days, and look upon him with pride. To see Anakin, next to Obi-Wan and Yoda, all three of them smiling back at Luke - their work was done, all is well. It's a beautiful if-brief moment, and I found it quite moving.

Now, for me, a new fan of Star Wars and someone who hasn't seen the original releases, I wasn't bothered by this change. Personally, I felt that it showed continuation, and even though it is just a film, not a real story, I was moved to tears by the fact that Luke could see his father, Anakin, as he was before he was Darth Vader. That continuation and sense of authenticity gave the scene emotional impact. I even preferred the new music - it sounded like a happy celebration and had tearjerking power. However, I could see instantly that this was a big move and possibly a major error to fans of the original films.

So, I asked myself - in this day in age where there are constant re-releases of films and DVDs and the ability to alter things digitally, when is it okay to alter the original format of a film?

As I have said, I can't say much about Star Wars because I'm new to those films. But say in 20 years time, Peter Jackson released a new, altered version of The Lord of the Rings trilogy, I would be absolutely furious. I would be so angry that he had changed something which I loved and knew second for second from the day it was first released. I hate the extended versions of LOTR, and am so relieved that we have the choice of original cuts on DVD. I love the flow of original LOTR, I think it all flows perfectly, so when I saw the extended versions I couldn't stand it. It didn't flow as well, and everything was wrong. It was ruined.

Two other examples are the latest re-releases of Disney's Beauty and the Beast (1991) and Pocahontas (1995). Disney are making a habit of adding extra scenes into their classics. With Beauty and the Beast, you have the option of watching the version with the extra scene and without. I always choose without because I don't like the scene. Unfortunately, with Pocahontas you don't have that same choice. With Pocahontas you can watch only the new version and worst of all, not only are there added scenes, but the original scenes have been altered. The scene where Pocahontas meets John Smith in the tent now has a song in it - a lovely song - but it ruins the scene. What was once a romantic, tender, and heartwarming last goodbye turned into a cheesy singsong. The song isn't the issue - I love it, it's beautiful over the credits of the film, but here it doesn't work. The final scene where Pocahontas is saying farewell to John Smith is also completely altered, with that same song being sang. Both of these scenes had stunning, heartbreaking scores composed by Alan Menken playing over them. Both were mature and suited the mood of each scene. But Disney had to ruin that by inserting the theme song, changing the animation (which also stood out as different)... I mean why do that? You've ruined the original parts. At least enable us to skip new scenes. With altered scenes you ruin the film itself, and we, the fans, are stuck with it.

With that in mind, I sympathise with Star Wars fans because they've loved the franchise for years,. When you know something so well and love it so much, it is horrible to have it changed. And it's not like you can ignore it. When you are a fan of anything you know it like the back of your hand, and even the slightest change is instantly recognisable. You can't ignore it. It is in your face.

So, even though I liked the inclusion of Christensen's Anakin in Return of the Jedi, I can completely understand why long-serving fans of the franchise are upset and annoyed. If you're going to do these things, give fans the choice of original theatrical release - always - and you're altered version alongside it. Never merge the two together. Take note all.
Posted by TheClaud at 14:42 2 comments:

A sad week for old Hollywood

These last couple of weeks have been pretty shocking in the world of old Hollywood. Even though that era ended decades ago, the films and people of that time still thrive in the hearts and minds of fans across the globe. From those who were alive during 1930s-50s, to someone like me who discovered them at the age of 15 back in 2006, there is still a massive following for the great films and legends of those golden years. There have been a few deaths recently, but I will only comment on those actors who's films I've seen. May they each rest in peace.


Beautiful Joan. Just the other day me and my sisters were discussing how many of the 'old stars' were left, and I commented on how both Joan and her sister Olivia de Havilland (respectively) were still going strong. How shocked I was today to hear of Fontaine's passing. She is so splendid in Rebecca (1940). Few can pull off naive, innocence, and sweetness - usually it just comes across as stupid or someone can't act. But Fontaine performed the role of Mrs. de Winter masterfully. She was adorable and totally convincing as the woman to save Maxim de Winter (Laurence Olivier) from the darkness of his previous marriage. Later in her career, she played the role of Rowena in Ivanhoe (1952) opposite Robert Taylor and Elizabeth Taylor. She plays an older woman who loses the heroic Ivanhoe to the young and ridiculously beautiful Rebecca. For this she had to have dignity, class, and be gracious in defeat. Fontaine was perfect in this role.

I have yet to see her in Suspicion (1941) - the picture which won her the Best Actress Oscar and was her second outing with Alfred Hitchcock. Others in her filmography I am eager to see are Letter From An Unknown Woman (1948) and The Constant Nymph (1943). Thank you for the wonderful performances, Mrs. de Winter, it was always a pleasure.


I haven't always been O'Toole's biggest fan. He was never my favourite actor, but I respected him greatly and was blown away by his performance in Lawrence of Arabia (1962) when I watched it for the first time last year. Without a doubt his performance as Lawrence is one of the greatest by an actor in cinema. Absolutely outstanding.

When I watched The Sound of Music (1965) with my best friend a couple of years ago, she commented on how attractive the Baroness was and asked me if she was particularly famous. Not knowing who the actress was, I replied no. How stupid I felt when the credits rolled and I saw that it was Eleanor Parker, an actress who's name I'd seen constantly in film studies, analysis, and on DVD covers. She was really brilliant in The Sound of Music. The two leads of Julie Andrews and Christopher Plummer almost steal the show, but Parker really held her own and is as memorable as anyone else in the film. Her presence is strong and her character feels like a real threat to Maria and the Captain's chance of happiness. But Parker doesn't ruin the role by making herself a villainess, or acting over-the-top with jealousy. Instead she is very sweet, polite, decent, and proper, perfectly camouflaging the anger she probably feels at this nun contemplating her plans for marriage. What is so clever about Parker is that beneath that elegant facade, you can see the coldness in her eyes, like a viper, with her eyes carefully watching Maria's ever move. A wonderful performance.

So it's that time where we look back on the current year and decide whether it was good/bad. Mine has been good... in the way that nothing tragic has happened, but I'm not where I was hoping to be a year ago. Basically I can't complain but it hasn't been great. Regardless, I do have hopes for 2014. I won't bore you with my personal ones, but here are my discoveries in film and other things that I am happy with, followed by what I hope to improve on over the coming year.


2014:
Obviously I have more personal goals involving friends, health, career, and places to visit - enjoying life and living it to the full blah blah blah - but they're not relative to this blog. I doubt anyone will read this and if anyone does read it then I'm sure they'll want their 5 minutes back. But I thought I would post it anyway.