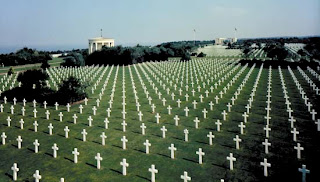 When we think of Saving Private Ryan, the majority of us think of how Spielberg recreated the hell of the D-day landings. It ranks along with the greatest war scenes in film like those in Braveheart, Gladiator, and  the battles at Helm's Deep and Pelennor fields in the LOTR trilogy. Not only is the fighting on Normandy beach stomach-turning as well as captivating to watch, but a disturbing and horrific showing of the reality of war.

However, although this scene is out of this world incredible, and I could praise Spielberg all day for his work in it, I believe more credit should be given to the scene before the Normandy landings: the scene in the Normandy American Cemetery. As we watch this old man, clearly distressed, determinedly making his way to a place, which we do not know yet. His family follow behind as some sort of support. And then finally, as the old man stops to catch his breath, with a glimpse of the American flag waving in the wind, he starts walking again, slowly revealing one by one, those beautiful white marble graves. Pristinely kept, and stunning to behold, more and more of the graves appear. The camera pans upwards slightly so that we finally feel and see the sheer mass of graves there are in this cemetery. Stood side by side, immaculately presented, gleaming in the light- men who fought bravely on that unforgettable day are united together.

The great John Williams composed the score for this movie, and the music for this scene is one of my favourites. It begins with a very solemn and official trumpet, but then as the graves come into view, a weeping orchestra of strings bounds into action, swelling in a melancholy manor to reveal the breathtaking view of this overwhelming memorial. For me this is the genius of Spielberg- at it's most potent and yet it's most subtle. There are no special effects, fancy speeches, or odd camera movements.

What is so touching about the scene also is the fact that Spielberg lays out in front of us all of the men who died for us. We are here today because of their bravery. The fact that they are a small fraction of the overall number of heroes who died fighting in wars is another emotional punch, and I don't know how anyone cannot be moved to tears by that image of endless gravestones. 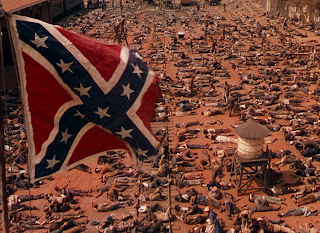 I would like to think that Spielberg got his inspiration in this scene from Gone with the Wind, when Scarlett is looking for a doctor because she needs help, but as she looks around, the camera pans upwards higher and higher, revealing thousands of others needing help too, and ending with a shot of all the bodies and injured men, and their flag in the foreground. Both scenes show the atrocities caused by war, and the scale of death and pain it causes. But they also show the bravery and patriotism that all these men possessed and fought with.That scene from Gone with the Wind is extremely powerful, shocking and moving, and what Spielberg created in Saving Private Ryan was equally so.

Posted by TheClaud at 06:26 No comments:

The Greatest Gown in Cinema

Some of the most beautiful dresses in the world have been made in Hollywood, particularly during the 1940s and 1950s. The most popular have achieved mythical status, like Audrey Hepburn's little black dress in Breakfast at Tiffany's (1961) and Marilyn Monroe's white dress in The Seven Year Itch (1955).

However, for me the greatest gown made in Hollywood is the red one worn by Vivien Leigh for her role as Scarlett O'Hara in Gone with the Wind (1939). Not only is it worn by arguably the most beautiful woman in film, but it is a triumph of dressmaking- with it's rubies, feathers, and overall breathtaking appearance. It mirrored the strength, presence, boldness and striking beauty of it's wearer, and is perfect for the scene it was made for. Scarlett is about to enter a party where all its guests are gossiping about her, maybe even calling her a 'scarlet woman', and definitely believing that she would not have the nerve to come along. But, even though Scarlet was reluctant to go, Rhett forces her, questioning whether she has the brashness to go into 'the lion's den'. Of course Scarlett holds her head high and enters the room with regal defiance and elegance, much to everyone's surprise and annoyance.

If ever a dress succeeded in making a big entrance, it was this stunning red gown designed by Walter Plunkett. All the costumes designed for Gone with the Wind are masterpieces, but this one is the ultimate show-stopper.

I have been running my own YouTube channel for nearly three years now, and I am starting to worry that it might one day be removed. It is a channel dedicated to film, mostly from the classical period, with tributes containing music and clips. Many YouTubers who do the same as me have had their channels deleted without notice, and I'm pretty sure my time is nearly up. It will be gutting, as I have 545, 207 total uploaded views, 36, 416 channel views, and 1, 590 subscribers. My channel isn't as successful as say Pixiwoo or RayWilliamJohnson, but for what it is, it has done very well. I am incredibly proud of my channel, especially when people write their encouraging comments.

This post is just to say that if my channel is removed, as I am sure it one day will be, that within a week at most, I will have another channel up and running, with a similar name and my videos will all be on there too. Thank you for reading this if you have, and thank you to everyone who has ever viewed or commented my videos, and subscribed to my channel. This post is not me trying to brag or get you to view my channel, it's merely a back-up for the future. www.youtube.com/MonroeSmile
Posted by TheClaud at 10:16 5 comments: 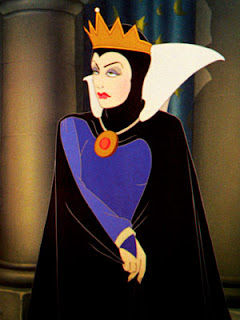 Not the most thought-provoking start to my blog, and I apologise for that. But The Evil Queen off Walt Disney’s Snow White and the Seven Dwarfs has mesmerised me since I was a child, and even more so as an adult. I think she is the evillest out of Disney’s wonderful cast of villains for she is the most terrifying, for example the scene where she orders the huntsman to kill Snow White and bring back her heart, is chilling, especially when she says it so coldly. There is no humour in her lines, unlike other villains like Cruella DeVil and Lady Tremaine (Cinderella’s evil stepmother). Her voice is again, cold and hard, voiced immaculately by Lucille La Verne. She breathes real life into the Evil Queen, giving her a presence and authority that, considering this film was made in 1937, audiences probably didn’t believe was possible for an animation. Her costume mirrors her power and sternness with its dark colours, dominating collar and the way her hair is covered (we never see her hair until she turns into the hag), creates a feeling of not knowing what dark thoughts lurk in her mind. All we see is this strikingly beautiful, (but very harsh) pale face, angrily glaring back at us.


The main point to this post is the influence animators at Disney had when creating the Evil Queen. It is widely recognised and agreed that there must have been a lot of inspiration from Joan Crawford. Crawford was one of the most beautiful women in cinema, but her features were bold and with her daring make-up on top it, made her look fierce and severe. Also her trademark exaggerated lip. Crawford was also one of the few actresses nicknamed the Queen of Hollywood. However, aside from the indisputable resemblance to Crawford, the Evil Queen’s face also possesses a remarkable resemblance to Greta Garbo and Marlene Dietrich.

The blank yet severe look in Garbo's face is very similar to those of the Evil Queen, as well as Garbo’s costume in Queen Christina. Garbo in Mata Hari, where her hair is scraped back tightly, so all you see is her face. As for Dietrich, although many actresses in Hollywood (Harlow, Lombard) had the baby doll eyebrows, highly arched, I’d say the inspiration was from Dietrich, particularly in The Devil is a Woman. One, because Dietrich’s eyes had a sultry but cruel quality- Harlow and Lombard's appearance was always sexy but funny and happy. Dietrich could give men the eye but she could also give some of the nastiest glares in cinema, second only to Davis and Crawford. The Queen's heavy-lidded make-up along with prominent cheekbones is also very Dietrich inspired I’d like to think. For me, combine Crawford, Garbo and Dietrich, and you have the Evil Queen. Ironically, Louis B. Mayer stated on Snow White and the Seven Dwarfs release, “Who’d pay to see a drawing of a fairy princess when you can watch Joan Crawford’s boobs for the same price?” because although you didn’t see what Mayer was referencing too, audiences did get to see a Joan Crawford, more or less.


Credit must go to Helen Gahagan in the film She (1935) where her character and costume have been credited as the main inspiration for the Evil Queen. The trailer for this film is on YouTube via this URL, go to 0:56 to see the resemblance: http://www.youtube.com/watch?v=eYJ3bZZTFvs.

Who knows why the Evil Queen, although she already had a character from a previous film to be based on, was given traits and qualities belonging to the biggest female stars of its time. Maybe it was because the Evil Queen’s harsh beauty fitted their features, maybe it was because all three were starting to age and as goddesses of the screen, still hung on to their looks hoping to maintain their former beauty and youth (like the Evil Queen). 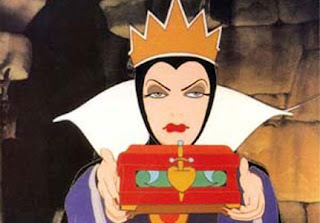 Don’t get me wrong Crawford, Garbo and Dietrich were not old by any means, but in an industry where image is paramount like Hollywood, and when fresh, new beauties like Hedy Lamarr and Lana Turner were being groomed for stardom, the fight to be the fairest of all Tinseltown was a big part in their career’s, as it is for any actress who hits the age where she can play mother parts. The most likely reason for Disney using screen goddesses as inspiration, I believe, was that this was the first feature length animation in the U. S., therefore Disney and his animators wanted to give the characters qualities and appearances that were already very familiar with their audience.
Posted by TheClaud at 14:21 6 comments: