On the Waterfront: Realistically Speaking 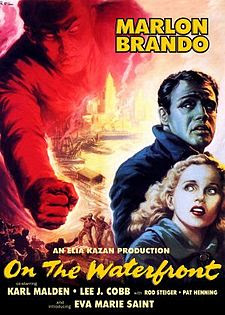 There has been so much written about Elia Kazan's On the Waterfront (1954). I don't think that anyone
who watches it doesn't feel the full impact of the power the film possesses - the power of its story, script, direction, musical score, performances, and of course, the formidable Marlon Brando. I can't do any more justice than those before me who have written about this film can, however, there are two aspects which I picked up on when I last watched it.

I was struck by how realistic the love story between Terry Malloy (Brando) and Edie Doyle (Eva Marie Saint) was played out. Obviously credit goes to the actors themselves; I think we all fall in love with Terry as he is torn between doing what is right and what is wrong, his brooding personality, his god-like good looks, and we can see why he falls for Edie because she is so sweet, wholesome, and willing to stand-up against the mob. But how many times have we watched a film where the love story in the narrative just seems that bit too convenient, like it blossomed too quickly, or we didn't really see the love blossom at all. It usually goes from attraction to full blown love in a couple of scenes. 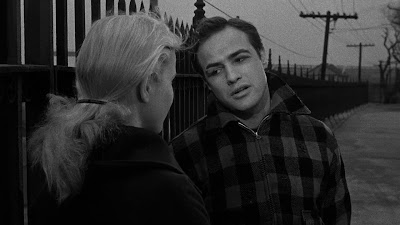 In On the Waterfront, however, we really feel like we are witnessing genuine love. Not soppy romance, but a deep, and strong love between two people who are caught in a web of crime and dark dealings. Terry is a good guy, he never knew that he was helping his mob friends kill Edie's brother, nor does he want any business with them. He also equally doesn't want to get involved in bringing them down, he wants their power to end but he doesn't want to be the one person that puts his neck on the line in doing so. Nevertheless, within those first few meetings he has with Edie, we can see his curiosity about her, he enjoys her company, she's finally somebody that he can talk to. Hey we could be watching any two people in the world rather than two actors on the screen. 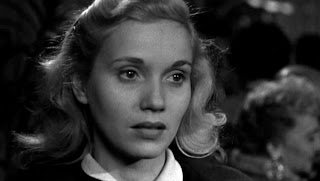 Equally we can see why Edie falls for Terry. He is strong but vulnerable, he isn't one of the mob but in not standing-up against them he is acting as one of them, he needs her to pull himself out of their trap. Also, he looks after, he can protect her, he is handsome, and a good man through and through. 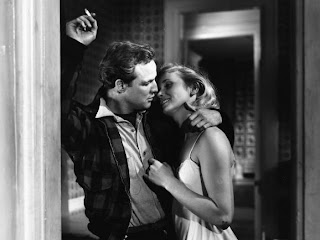 I adore the scenes between them; for example where he takes her for a drink and he lets her try her first beer - there is something so innocent and young about this set-up. Another scene is where they end up at a wedding party and they dance
together. There are no dreamy violins, swirling ballgowns, or traditional romantic styles and yet it is irresistibly romantic because it simply shows a pair of young people having a good time. He likes her, she likes him, they dance together, and caught in the moment they almost kiss (annoyingly they are interrupted). This is such a simple scene but it's so cute, I know that word sounds out of place and childish but it is. It's adorable to watch these two lovebirds having fun and realising their feelings for each other. Even the scene later where Terry storms into her house and kisses her is pretty steamy -  one of the best kisses in Hollywood history as far as I'm concerned.

Therefore, when we watch these well-crafted, well-acted scenes which show a romance blossoming in the most normal and pure way, we really feel that this is a genuine love between two people. Not some convenient romance for the plot-line. 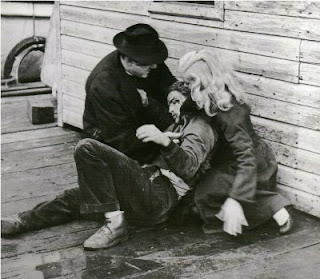 Another realistic aspect of the picture which I found really powerful was when Terry is beaten to a pulp in the final moments. Again, how many times have we seen a film where the character has been almost beaten to death and yet it is conveyed purely by some fake blood and a few groans. Half the time it never feels like a character has taken a real beating. But in On the Waterfront, my word do we feel for Terry after Johnny Friendly's thugs have had their way with him. Brando doesn't over do it with moans and cries or winces, he is completely silent - his eyes are shut because he can barely open them, his head is bowed because it is throbbing, he holds his side because it hurts so much. As an audience we feel as if we are witnessing a man who has been completely broken for standing up to the thugs of the waterfront. Kazan's direction here also comes into play; he doesn't let Malloy stand-up for a good few minutes. He wants the audience to believe that Terry has been brought to his knees - he can't make a stand anymore. That way when he finally does stand-up with blood dripping down his face, his eyes swollen, and then stumbles his way back past the workmen to the employer, the audience can give one hell of a cheer; the conquest is that much more profound, awe-inspiring, and emotional. 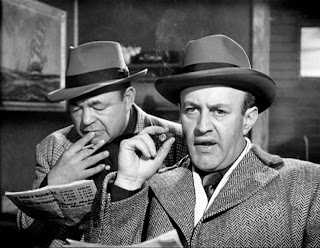 We could talk about every aspect of this film for days on end. Karl Malden turns a great performance as the local priest trying to pull his community out of the darkness. Marie Saint is truly wonderful here. Rod Steiger as Terry's brother Charlie pulls-off the effect of a brother realising how much he has let his younger brother down. And who can forget Lee J. Cobb as the vulgar mob chief, yelling and ordering everybody around. The score in this film adds to the gloomy atmosphere for the docks where everybody has been under the control of gangsters for too long.
Few films are as powerful as this one and even fewer have that power coming from every one of its cast. What Kazan and his crew created in this film is undeniably a benchmark in the world of film. Throughout the entire picture you feel like the tension is bubbling away and that it's constantly increasing in pressure until near the end you see it burst in Terry when his brother is killed. 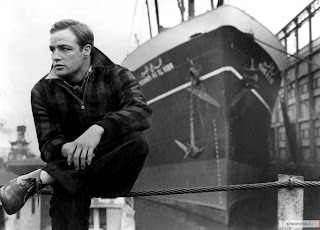 Basically everyone should see this film at some point in their lives. And it goes without saying, the film is a must-see for Brando alone, to view his incredible talent, presence, and unmatched mastery as a performer/actor.

Even if you aren't one for black and white films, or anything pre-1970, On the Waterfront will blow you away. It has stood the test of time in every aspect.
Posted by TheClaud at 11:37 3 comments: